Kung-î family was powerful in the state of Lû, Kung-î Hsiû was priminister in the reign of Duke Mû. He liked eating fish, but once he rejected some fishes offered as bribery. The briber asked the reason, he said:"I am the priminister of the state, I don't lack means of getting good fish. If I accept yours, I might get punished and lose my position. Who would send me fish any more? 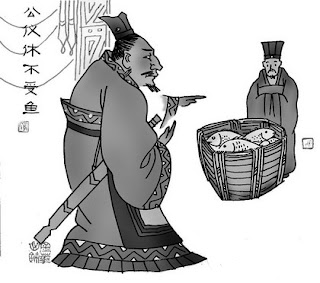 Another famous person of the Kung-î family, was Kung-î Chung-tsu. Though we don't know his real name, Chung-tsu was just a courtsey name, his case of choosing younger brother as successor instead of his grandson in the line of rightful heir has been discussed for thousands of years.

In ancient China as in the rest of the civilized world, the rule of succession to position and property was that the first born was the proper heir. If the eldest son died, the succession should be descended to the grandson in the line of rightful heir.

Histroy didn't tell us if Chung-tsu's eldest son was alive at the time, but we suppose he was dead. Anyway, when Kung-î Chung-tsu died, his younger son, who was by a different wife, and whose position was inferior, was made the head of the family.

At the mourning rites for Kung-î Chung-tsu, Than Kung was there, wearing the mourning cincture for the head, which mourning dress was proper for a friend. In the ceremony, Than Kung noticed that Chung-tsu had passed over his grandson, and appointed one of his younger sons as his successor and head of the family. Than Kung said to himself, ‘How is this? I never heard of such a thing;’ and he hurried to Tsu-fû Po-tsu at the right of the door, and said, ‘How is it that Chung-tsu passed over his  grandson, and made a younger son his successor?’ Po-tsu replied, ‘Chung-tsu perhaps has done in this, like others, according to the way of antiquity. Anciently, king Wăn of Chou passed over his eldest son Yî-khâo, and appointed king Wû; and the count of Wei passed over his grandson Tun, and made Yen, his own younger brother, his successor. Chung-tsu perhaps did also in this according to the way of antiquity.’

Than Kung was not disciple of Confucius, but he was a friend of Tsu-yû. Tsu-yû asked Confucius about the matter, and Confucius did not hesitate to speak out the truth, he said, ‘Nay, the rule is to appoint the grandson.’