Spotted bamboos of the Hsiang River

Long ago, Emperor Yâo had two beautiful daughters, called Ê Hwang and Nü Ying. After the emperor had been on the throne seventy years, he abdicted the throne to Emperor Shun, and gave his two daughters in marriage to Shun.

Emperor Shun died on a tour of inspection to the south, and buried in the plain of Ts'ang-wû.

When Ê Hwang and Nü Ying heard the news of Shun's death,  they stood on the shores of the Hsiao-hsiang, to the south of Lake Tung-t'ing. Their sorrow was deep as the waters of the Lake that go straight down a thousand miles. Dark clouds blackened the sun. The demon-monkey howled in the mist and ghosts whistled in the rain.

The queens said, " Though we speak of it we cannot mend it. High Heaven is secretly afraid to shine on our loyalty. But the thunder crashes and bellows its anger, that while Yao and Shun are here they should also be crowning Yü. When a prince loses his servants, the dragon turns into a minnow. When power goes to slaves, mice change to tigers. But the Nine Hills of Deceit stand there in a row, each like each ; and which of them covers the lonely bones of the Double-eyed One, our Master ?"

So the royal ladies wept, standing amid yellow clouds. Their tears followed the winds and waves, that never return. And while they wept, they looked out into the distance and saw the deep mountain of Ts'ang-wû.

"The mountain of Tsang-wu shall fall and the waters of the Hsiang shall cease, sooner than the marks of our tears shall fade from these bamboo-leaves."

After that the two queens dived into the deep water of Hsing river.  The spots on the bamboo-leaves which grow on the Hsiang River were caused by the tears of these two queens. 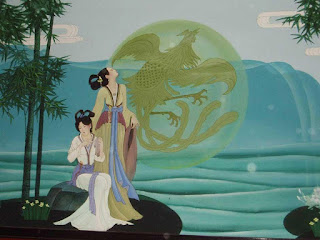