September 22, 2013
Sun Tzu Wu was a native of the Ch'i State. His Art of War brought him to the notice of Ho Lu, King of Wu. Ho Lu said to him: "I have carefully perused your 13 chapters. May I submit your theory of managing soldiers to a slight test?"

Sun Tzu replied: "You may."

Ho Lu asked: "May the test be applied to women?"

The answer was again in the affirmative, so arrangements were made to bring 180 ladies out of the Palace. Sun Tzu divided them into two companies, and placed one of the King's favourite concubines at the head of each. He then bade them all take spears in their hands, and addressed them thus: "I presume you know the difference between front and back, right hand and left hand?"

Again the girls assented. The words of command having been thus explained, he set up the halberds and battle-axes in order to begin the drill. Then, to the sound of drums, he gave the order "Right turn." But the girls only burst out laughing. Sun Tzu said: "If words of command are not clear and distinct, if orders are not thoroughly understood, then the general is to blame."

So he started drilling them again, and this time gave the order "Left turn," whereupon the girls once more burst into fits of laughter. Sun Tzu: "If words of command are not clear and distinct, if orders are not thoroughly understood, the general is to blame. But if his orders are clear, and the soldiers nevertheless disobey, then it is the fault of their officers."

So saying, he ordered the leaders of the two companies to be beheaded. Now the King of Wu was watching the scene from the top of a raised pavilion; and when he saw that his favourite concubines were about to be executed, he was greatly alarmed and hurriedly sent down the following message: "We are now quite satisfied as to our general's ability to handle troops. If We are bereft of these two concubines, our meat and drink will lose their savour. It is our wish that they shall not be beheaded."

Sun Tzu replied: "Having once received His Majesty's commission to be the general of his forces, there are certain commands of His Majesty which, acting in that capacity, I am unable to accept."

Accordingly, he had the two leaders beheaded, and straightway installed the pair next in order as leaders in their place. When this had been done, the drum was sounded for the drill once more; and the girls went through all the evolutions, turning to the right or to the left, marching ahead or wheeling back, kneeling or standing, with perfect accuracy and precision, not venturing to utter a sound. Then Sun Tzu sent a messenger to the King saying: "Your soldiers, Sire, are now properly drilled and disciplined, and ready for your majesty's inspection. They can be put to any use that their sovereign may desire; bid them go through fire and water, and they will not disobey."

But the King replied: "Let our general cease drilling and return to camp. As for us, We have no wish to come down and inspect the troops."

Thereupon Sun Tzu said: "The King is only fond of words, and cannot translate them into deeds."
After that, Ho Lu saw that Sun Tzu was one who knew how to handle an army, and finally appointed him general. In the west, he defeated the Ch`u State and forced his way into Ying, the capital; to the north he put fear into the States of Ch'i and Chin, and spread his fame abroad amongst the feudal princes. And Sun Tzu shared in the might of the King. 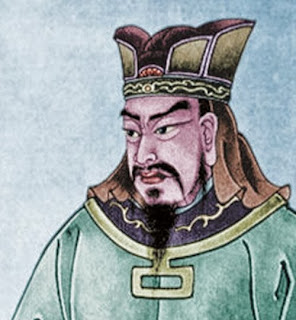