November 27, 2013
The Classics of Mountains and Seas says, there is a god on the mountain of Celestial Mountain,  whose form resembles a yellow sack with a red aura like cinnabar. He has six legs and four wings and exists in a state of confusion with no face or eyes. He knows how to sing and dance for he is,
in fact, Di-Jiang. This God Di-Jiang was actually the Cosmogonic Chaos, or Hundun.

Shû and Hû were continually meeting in the land of Chaos, who treated them very well. They consulted together how they might repay his kindness, and said, `Men all have seven orifices for the purpose of seeing, hearing, eating, and breathing, while this (poor) Ruler alone has not one. Let us try and make them for him.' Accordingly they dug one orifice in him every day; and at the end of seven days Chaos died. 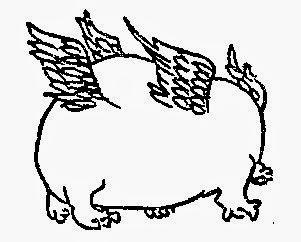