June 21, 2014
ONCE upon a time there was a young man named Ch'e, who was not particularly well off, but at the same time very fond of his wine; so much so, that without his three stoups of liquor every night, he was quite unable to sleep, and bottles were seldom absent from the head of his bed. One night he had waked up and was turning over and over, when he fancied some one was in the bed with him; but then, thinking it was only the clothes which had slipped off, he put out his hand to feel, and, lo! he touched something silky like a cat, only larger. Striking a light, he found it was a fox, lying in a drunken sleep like a dog; and then looking at his wine bottle he saw that it had been emptied. "A boon-companion," said he, laughing, as he avoided startling the animal, and covering it up, lay down to sleep with his arm across it, and the candle alight so as to see what transformation it might undergo. About midnight, the fox stretched itself, and Ch'e cried, "Well, to be sure, you've had a nice sleep!" He then drew off the clothes, and beheld an elegant young man in a scholar's dress; but the young man jumped up, and making a low obeisance, returned his host many thanks for not cutting off his head. "Oh," replied Ch'e, "I am not averse to liquor myself; in fact they say I'm too much given to it. You shall play Pythias to my Damon; and if you have no objection, we'll be a pair of bottle-and-glass chums." So they lay down and went to sleep again, Ch'e urging the young man to visit him often, and saying that they must have faith in each other. The fox agreed to this, but when Ch'e awoke in the morning his bedfellow had already disappeared. So he prepared a goblet of first-rate wine in expectation of his friend's arrival, and at nightfall sure enough he came. They then sat together drinking, and the fox cracked so many jokes that Ch'e said he regretted he had not known him before. "And truly I don't know how to repay your kindness,'' replied the former, "in preparing all this nice wine for me." "Oh," said Ch'e, "what's a pint or so of wine? nothing worth speaking of." "Well," rejoined the fox, "you are only a poor scholar, and money isn't so easily to be got. I must try if I can't secure a little wine capital for you." Next evening when he arrived, he said to Ch'e, "Two miles down towards the south-east you will find some silver lying by the wayside. Go early in the morning and get it." So on the morrow Ch'e set off and actually obtained two lumps of silver with which he bought some choice morsels to help them out with their wine that evening. The fox now told him that there was a vault in his back-yard which he ought to open; and when he did so, he found therein more than a hundred strings of cash.  "Now then," cried Ch'e, delighted, "I shall have no more anxiety about funds for buying wine with all this in my purse." "Ah," replied the fox, "the water in a puddle is not inexhaustible. I must do something further for you." Some days afterwards the fox said to Ch'e, "Buckwheat is very cheap in the market just now. Something is to be done in this line." Accordingly, Ch'e bought over forty tons, and thereby incurred general ridicule; but by-and-by there was a bad drought and all kinds of grain and beans were spoilt. Only buckwheat would grow, and Ch'e sold off his stock at a profit of one thousand per cent. His wealth thus began to increase; he bought two hundred acres of rich land, and always planted his crops, corn, millet, or what not, upon the advice of the fox secretly given him beforehand. The fox looked on Ch'e's wife as a sister, and on Ch'e's children as his own; but when, subsequently, Ch'e died, it never came to the house again. 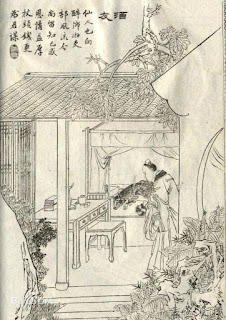