June 09, 2014
A Kiang-Si gentleman, named Meng Lung-t'an, was lodging at the capital with a Mr. Chu, M.A., when one day chance led them to a certain monastery, within which they found no spacious halls or meditation chambers, but only an old priest in deshabille. On observing the visitors, he arranged his dress and went forward to meet them, leading them round and showing whatever there was to be seen. In the chapel they saw an image of Chin Kung, and the walls on either side were beautifully painted with life-like representations of men and things. On the east side were pictured a number of fairies, among whom was a young girl whose maiden tresses were not yet confined by the matron's knot. She was picking flowers and gently smiling, while her cherry lips seemed about to move, and the moisture of her eyes to overflow. Mr. Chu gazed at her for a long time without taking his eyes off, until at last he became unconscious of anything but the thoughts that were engrossing him. Then, suddenly, he felt himself floating in the air, as if riding on a cloud, and found himself passing through the wall, where halls and pavilions stretched away one after another, unlike the abodes of mortals. Here an old priest was preaching the Law of Buddha, surrounded by a large crowd of listeners. Mr. Chu mingled with the throng, and after a few moments perceived a gentle tug at his sleeve. Turning round, he saw the young girl above-mentioned, who walked laughing away. Mr. Chu at once followed her, and passing a winding balustrade arrived at a small apartment beyond which he dared not venture further. But the young lady, looking back, waved the flowers she had in her hand as though beckoning him to come on. He accordingly entered and found nobody else within. Then they fell on their knees and worshipped heaven and earth together, and rose up as man and wife, after which the bride went away, bidding Mr. Chu keep quiet until she came back. This went on for a couple of days, when the young lady's companions began to smell a rat and discovered Mr. Chu's hiding-place. There-upon they all laughed and said, "My dear, you are now a married woman, and should leave off that maidenly coiffure'' So they gave her the proper hair-pins and head ornaments, and bade her go bind her hair, at which she blushed very much but said nothing. Then one of them cried out, "My sisters, let us be off. Two's company, more's none." At this they all giggled again and went away. 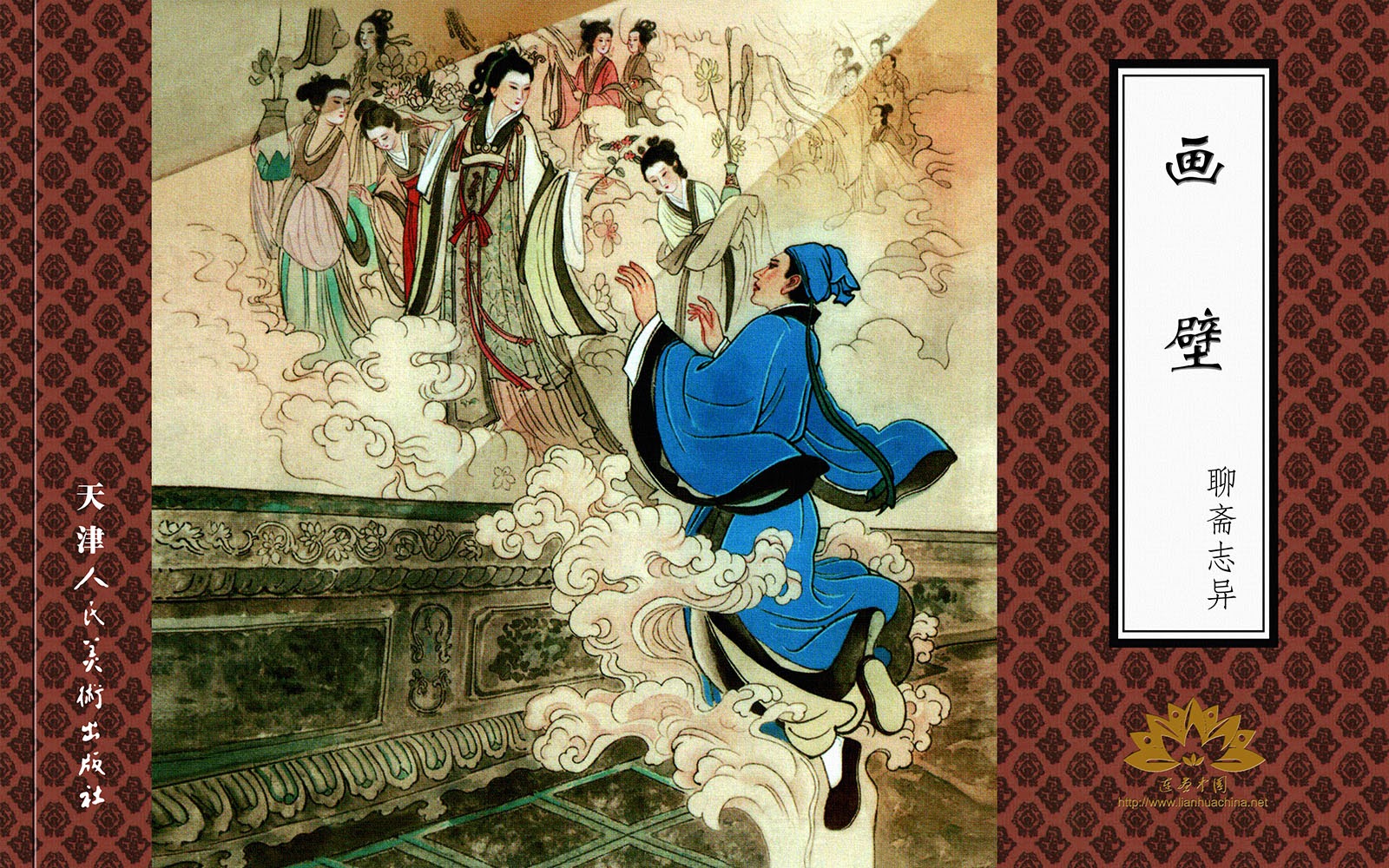 Mr. Chu found his wife very much improved by the alteration in the style of her hair. The high top-knot and the coronet of pendants were very becoming to her. But suddenly they heard a sound like the tramping of heavy-soled boots, accompanied by the clanking of chains and the noise of angry discussion. The bride jumped up in a fright, and she and Mr. Chu peeped out. They saw a man clad in golden armour, with a face as black as jet, carrying in his hand chains and whips, and surrounded by all the girls. He asked, "Are you all here?" "All," they replied. "If," said he, "any mortal is here concealed amongst you, denounce him at once, and lay not up sorrow for yourselves." Here they all answered as before that there was no one. The man then made a movement as if he would search the place, upon which the bride was dreadfully alarmed, and her face turned the colour of ashes. In her terror she said to Mr. Chu, "Hide yourself under the bed," and opening a small lattice in the wall, disappeared herself. Mr. Chu in his concealment hardly dared to draw his breath; and in a little while he heard the boots tramp into the room and out again, the sound of the voices getting gradually fainter and fainter in the distance. This reassured him, but he still heard the voices of people going backwards and forwards outside; and having been a long time in a cramped position, his ears began to sing as if there was a locust in them, and his eyes to burn like fire. It was almost unbearable; however, he remained quietly awaiting the return of the young lady without giving a thought to the why and wherefore of his present position. 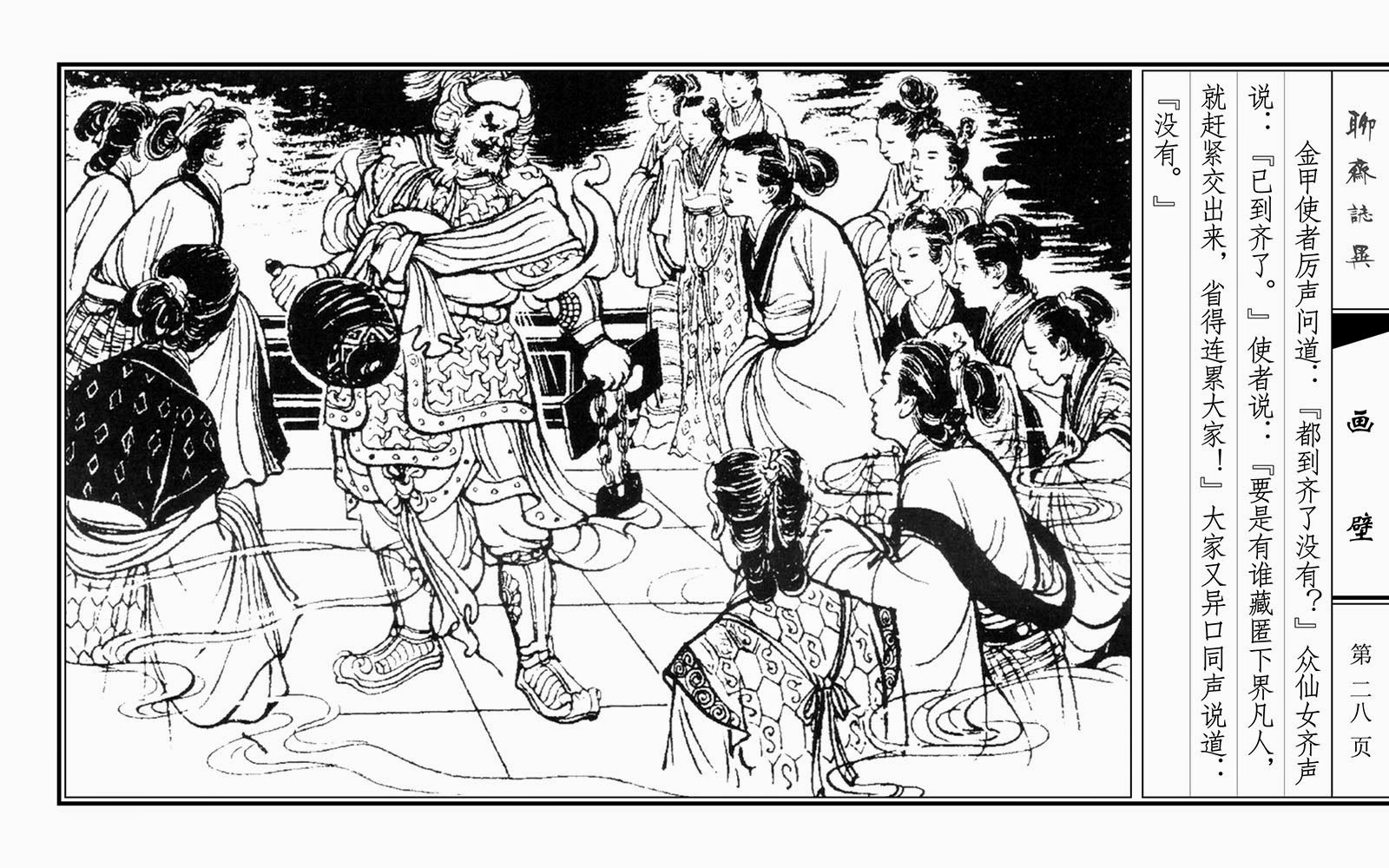 Meanwhile, Meng Lung-t'an had noticed the sudden disappearance of his friend, and thinking something was wrong, asked the priest where he was. "He has gone to hear the preaching of the Law," replied the priest. "Where ? " said Mr. Meng. " Oh, not very far," was the answer. Then with his finger the old priest tapped the wall and called out, "Friend Chu! what makes you stay away so long? " At this, the likeness of Mr. Chu was figured upon the wall, with his ear inclined in the attitude of one listening. The priest added, "Your friend here has been waiting for you some time ;" and immediately Mr. Chu descended from the wall, standing transfixed like a block of wood, with starting eyeballs and trembling legs. Mr. Meng was much terrified, and asked him quietly what was the matter. Now the matter was that while concealed under the bed he had heard a noise resembling thunder and had rushed out to see what it was. 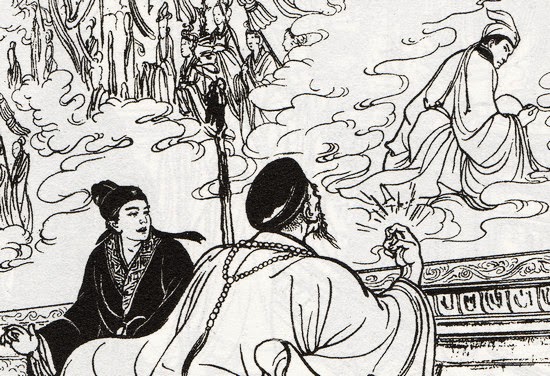 Here they all noticed that the young lady on the wall with the maiden's tresses had changed the style of her coiffure to that of a married woman. Mr. Chu was greatly astonished at this and asked the old priest the reason.

He replied, "Visions have their origin in those who see them: what explanation can I give?" This answer was very unsatisfactory to Mr. Chu; neither did his friend, who was rather frightened, know what to make of it all; so they descended the temple steps and went away.