June 24, 2015
Pangu separated the sky and the earth, then he died and his body turned into mountains, rivers, plants, animals, and everything else in the world, among which was Hua Xu.

While Hua Xu was wandering through Lei Ze Marshes, she trod on the toes of a giant footprint and became pregnant. Later she gave birth to a twin brother and sister, Fu Xi and Nü Wa. Fu Xi and Nü Wa have faces of human and bodies of snakes.

Nü Wa molded figures from the yellow earth and gave them life by breathing into their nostrils. In the beginning there was as yet no moral or social order among her offspring. Men knew their mothers only, not their fathers. When hungry, they searched for food; when satisfied, they threw away the remnants. They devoured their food hid and hair, drank the blood, and clad themselves in skins and rushes.

Then came Fu Xi and taught his subjects to cook, to fish with nets, to hunt with weapons made of bone, wood, or bamboo, and to domesticate animals. He united man and wife, instituted marriage, and laid down the law of humanity; He taught people to write, and invented the musical instruments Sheng Huang; He looked upward and contemplated the images in the Heavens, looked downward and contemplated the occurrences on earth, and devised the eighth Trigrams by reading the He Map and the Luo Book; He offered sacrifices to Heaven.

Then the terrible war between the Fire God Zhu Rong and the Water God Gong Gong broke out, Gong Gong was ashamed that he lost the fight with Zhu Rong, in a fit of rage he smashed his head against Buzhou Mountain, then knocked the earth's axis off center, causing it to tilt to the southeast and the sky to tilt to the northwest;  There were tremendous earthquake, lava and putrid water oozed up from underground; Fires blazed out of control and could not be extinguished; The sky would drop rain, hail, and meteors day and night; Water flooded in great expanses and would not recede. Ferocious animals ate blameless people; predatory birds snatched the elderly and the weak.

Nü Wa then smelted five-coloured stones to repair heaven, cut off the legs of a giant tortoise Ao to re-establish the axis of the earth, collected the ashes of burnt reeds to stop the inundation. Meanwhile Fu Xi also helped to bring the Great Waters into order by digging dikes. Nü Wa was, however, unable to fully correct the tilted sky and earth, and the land was swept by the great flood and only Fu Xi and Nüwa herself survived.

Fu Xi and Nü Wa retired to Kunlun Mountain where they offered sacrifice and prayed to Heaven. The brother and sister wished to become husband and wife, but they felt shy and guilty about their desire. So the brother took his younger sister to the top of the Kunlun Mountain, they set up two separated piles of fire and prayed: "If Heaven allows us to be man and wife, please let the smoke before us gather; if not please let the smoke scatter." The fire eventually became one, and the smoke before them gathered together. The Heaven approved their union and the siblings once again set about procreating the human race.

Fu Xi Nü Wa then ruled over his decedents for 115 years and both died. 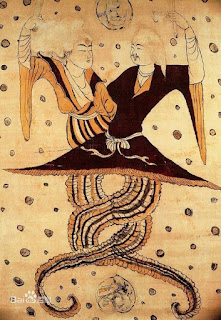