Qi the Abandoned One or the Legend of Hou Ji

June 13, 2015
At the beginning, the Jiang tribe settled on the plain along the Yellow River. A girl of this tribe named Jiang Yuan was virtuous and reverent to God. Jiang Yuan was betrothed and then married to Emperor Ku, but she was barren, so she presented pure offerings to God and sacrificed and prayed God to take away her childlessness. The next day she went out to the field, and saw a big foot print on the road, she was curious because of the huge size. So she put her own foot inside the big foot print to measure it. Suddenly she was moved and felt strange. Then she knew she had trod in the foot print of God, and had become pregnant.

She came back to her home, and rested. When she had fulfilled her months, she gave birth to a son, who came forth like a lamb, there was no bursting, nor rending, no injury, no hurt. But the birth of this child was so odd that Mother Jiang Yuan felt bewildered and tried to abandon her newborn baby. First the boy was placed in a narrow lane, but the sheep and oxen protected him with loving care. They walked carefully pass the baby, and fed him with grains. Then he was placed in a wild forest, where he was met with by the wood-cutters, who sheltered him from rains. At last he was placed on the cold ice, but the birds screened and supported him with their wings, and protected him nice and warm. When the birds went away, the boy began to wail. His cry was long and loud, so that his voice filled the whole land.

Mother Jiang Yuan heard her son’s crying and brought him back. So she named him Qi, meaning “the Abandoned One.” As soon as Qi learned to crawl, he was able to look for food by himself. He looked majestic and intelligent and grew up quickly, soon he was able to grow crops and became an expert in planting, growing luxurant crops. And God also bestowed on him a variety of excellent seeds, so that his production began to flourish, his row of paddy shot up beautifully; his hemp and wheat grew strong and close; his gourds yielded abundantly.

Many people gathered around him, and he led the whole tribe to Tai. He proceeded on the plan of helping the growth. Having cleared away the thick grass, he showed the ground with the yellow cereals. He managed the living grain , till it was ready to burst; Then he used it as seed , and it sprang up; It grew and came into ear; It became strong and good ; It hung down , every grain complete; --  And thus he was appointed lord of Tai, and was called Hou Ji.

Hou Ji led his people to worship God at Tai. He gave his people the beautiful grains: -- the black millet, and the double-kernelled; the tall red, and the white. They planted extensively the black and the double-kernelled, which were reaped and stacked on the ground. They planted extensively the tall red and the white, which were carried on their shoulders and backs home for the sacrifices.

Hou Ji strictly observed the rites of purification, the rites of offerings, and the rites of sacrifices, which were ordered by God. He let some hull the grain; some take it from the mortar; some sift it; some tread it. In this way they prepared their grain. Then they proceed to make sprits. It is then distilled, and the steam floats about. They made the stands both of wood and of earthenware, and load the stands with the offerings. They gather southernwood and offer it with the fat; they offer roast flesh and broiled. They sacrifice a ram to the God. As soon as the fragrance ascends, God smells the sweet savour and well pleased. 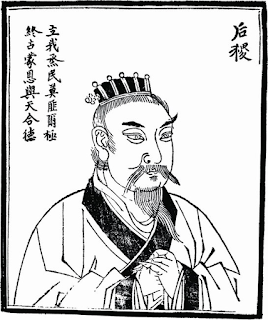