Clad in a single garment he was obedient to his mother

August 13, 2015
During the Chow dynasty lived Min Sun (also known by his courtesy name Tzu-ch'ien 闵子骞), whose mother died early so his father subsequently married another wife, who bore him two other sons, but dislike Min Sun.

Min Sun was ill-treated by his stepmother but he never bore any grudges against her. During winter, his stepmother prepared a coat made of reed catkins for him, but prepared coats made of cotton for his stepbrothers.

One day, Min followed his father out and was instructed to drive the carriage. However, as the coat was too thin, Min was unable to withstand the cold so he shivered and was unable to focus on the task at hand. He accidentally caused the carriage to get stuck in a ditch. Min's father was furious and started beating him until his clothes tore and the reed catkins came out. It was then when Min's father realised that his son was being mistreated. He was so angry that he wanted to expel Min's stepmother from the family. However, Min pleaded with his father to spare his stepmother, saying, "If she stays, only I suffer. But if you send her away, me and my stepbrothers will suffer." Min's stepmother was so touched that she regretted her actions and never mistreated Min again. 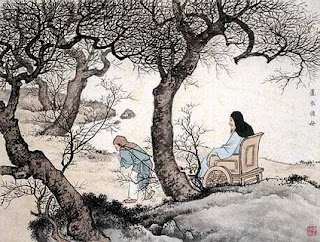