How Ancient Chinese Catches an Orangutan

August 24, 2015
The Classic of Mountains and Seas says,on the Magpie Mountain, there is an animal whose form resembles an ape with white ears. It walks crouched over but runs like a man. It is called Xing Xing (猩猩) . We guess it must be orangutan. The same book says, Xing Xing resembles a pig with a human face, it is capable of identifying people by name.

The book Records of the South says: The Xing Xing lives in the valleys in Ai Lao District, near modern Baoshan, Yunnan. It travels about without any fixed pattern and dwells along with the many other creatures.

People capture an Xing Xing by placing wine along its path. It is also fond of sandals, and the locals weave several tens of pairs of straw sandals, which they attach to each other. The Xing Xing in a valley, upon seeing the wine and sandals, knows it is a trap and also knows the name of the trapper. It calls it out and scolds him, saying, “You slave! You are trying to trap me!” and leaves. But then it returns, calling out as it samples the wine. At first, it drinks only a little and puts on a pair of sandals. But if it drinks a few pints, it becomes drunk and can be caught. Since the sandals are all joined together, it cannot leave and so it is grabbed and put in a cage. When someone wishes to fetch it, he goes to the cage and says, “Xing Xing! You can come out by yourself,” whereupon the Xing Xing turns to him and cries. 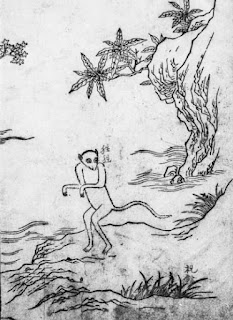