Tszeloo Carried Rice for His Parents

August 17, 2015
In the Chow dynasty lived Chung Yew, named also Tszeloo, who because his family was poor, usually ate herbs and coarse pulse. "Alas!" said Tszeloo, "although I was a scholar, yet my parents were poor; and how was I to nourish them?" Exhausted he travelled more than a hundred le to procure rice for his parents. Pleasantly he endured the toil, and exerted his utmost strength without any commendation.

Afterwards, when his parents were dead, he went south to the country of Tsoo, where he was made commander of a hundred companies of chariots; there he became rich, storing up grain in myriads of measures, reclining upon cushions, and eating food served to him in numerous dishes; but sighing, he said, "although I should now desire to eat coarse herbs and bring rice for my parents, it cannot be!" 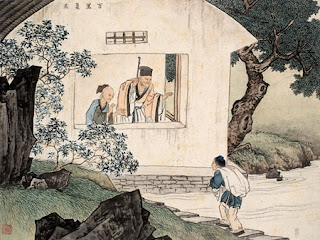