In the time of the Chow dynasty lived Tan, who possessed a very filial disposition. His father and mother were aged, and both were afflicted with sore eyes, to cure which they desired to have some deer's milk. Tan concealed himself in the skin of a deer, and went deep into the forests. He closely imitated the cry, yew yew, of the fawns, watching for the tracks of the herd of the deer, hiding among the herds of deer, to obtain some of their milk for his parents. While in the forests the hunters saw him, and were about shooting at him with their arrows, when Tan disclosed to them his true character, and related the history of his family, with the reason for his conduct. 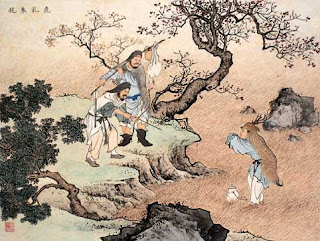 Tan Zi (Year of birth and death unknown), his surname was Yi (已姓), a Viscount, he was the king of the State of Tan in the of the Spring and Autumn Period. Viscount of Tan was the descendant of Emperor Shaohao, whose surname was Yi.

The Viscount of Tan was famous not only because he was filial son, but also because Confucius visited Tan Tzu and learned from him. In Seventeenth year of Duke Zhao of Lu, in autumn, the viscount of Tan came to the court of Lu.

'Zhongni having heard of this, he had an interview with the viscount of Tan, and learned from him. Afterward he said to people, " I have heard that, when the officers of the son of Heaven are not properly arranged, we may learn from the wild tribes all round about. The remark seems to be true."