September 16, 2015
Xingtian and the Yellow emperor struggled against each other for ultimate power.

The giant Xingtian was a follower of the Emperor Yan. After the victory of the Yellow Emperor over Emperor Yan at the Battle of Banquan, Xingtian followed his master to exile in the south.

The Yellow Emperor came forth and the two engaged in a ferocious combat, sword against axe, all the way down to earth to Eternally Auspicious Mountain (the mountain of ChangYang). In a final blow, the Yellow Emperor distracted his opponent with a trick and lunged ... and in a flash decapitated Xingtian, whose head rolled all the way to the foot of the mountain and created a thunderous roar.

Instead of dying, Xingtian was able to continue moving and began groping about for his head. The Yellow Emperor raised his sword to strike the mountain. The mountain split open, the head rolled within and the mountain closed again, thus Xingtian’s head was buried under the mountain forever.

Xingtian gave up looking for his head, and instead, his nipples then transformed into eyes, and his navel became a mouth. He performs a dance with an axe and shield.

The lyric poet Tao Qian expressed his commiseration on our tragic hero:

Xingtian dances wildly with spear and shield:
His old ambitions still burn fiercely.
In vain do they cling to their hearts from the past.
How can they, a better day, foresee? 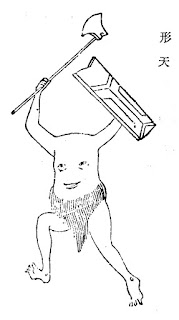