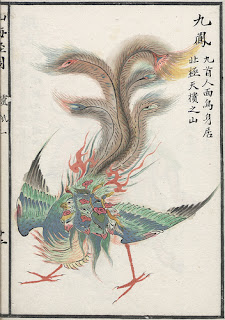 A LONG time ago there lived a king and queen who had a daughter. One day the daughter was walking in the garden, when suddenly a tremendous storm arose and carried her away. But the storm had come from the nine-headed bird. The bird carried off the princess and took her to its cave. The king did not know where his daughter had vanished to. So he ordered proclamation to be read throughout the land: ‘Whoever brings me back my daughter, shall have her for his wife.'

A young man had seen the bird carrying the king's daughter to its cave. But the cave was halfway up a steep rock face. No one could climb up to it from the bottom or descend to it from the top. As the young man was pacing around the rock another man came along and asked him what he was doing. He told him that the nine-headed bird had carried off the king's daughter and taken her to the cave in the mountain. The other man knew what to do. He called his friends and together they let the young man down to the cave in a basket. As he entered the cave he saw the king's daughter sitting there, bathing the wound of the nine-headed bird. The hound of heaven had bitten off its tenth head and the wound was still bleeding. The princess, however, motioned the young man to hide. This he did. The bird felt so much at ease while the king's daughter was bathing its wound and bandaging it that all its nine heads fell asleep one after the other.

Then the man stepped out from his hiding-place and with one sword cut of all the bird's heads. He led the princess outside and wanted her to be raised in the basket. But the king's daughter said: 'It would be better if you went up first and I followed you.' 'No,' said the young man. 'l will wait down here until you are safe.'

At first the princess was reluctant, but then she allowed herself to be persuaded and stepped into the basket. Before doing So, however, she took a long hairpin and broke it in two, giving the half to the young man and keeping the other herself. She also divided her silken kerchief with him and bade him guard both things carefully. But when the other man had hauled the king's daughter up to the top he took her with him and left the young man in the cave in spite of all his shouting and pleading.

The young man now inspected the cave. He saw a great many maidens who had been carried off by the nine-headed bird and had died there of hunger. On the wall was a fish, pinned to it with four nails. When he touched the fish it changed into a handsome young man who thanks him for rescuing him. The two young men pledged lifelong brotherhood to each other. Soon the young man felt the pangs of hunger. He stepped outside the cave to look for food but all he could see was stones. Suddenly he caught sight of a great dragon licking a stone. The young man likewise licked the stone and soon his hunger was gone. He then asked the dragon how he could escape from the cave. The dragon nodded his head towards his tail and motioned him to sit down on it. The young man stepped on the dragon's tail and in a trice he was down on the ground and the dragon had disappeared. He continued on his way and found a tortoise-shell full of beautiful pearls. But these pearls had magic powers: if they were thrown on a fire the fire stopped burning, if they were cast on the water the water parted so one cold walk through it. The young man took the pearls from the tortoise-shell and put them in his pocket. A short while afterwards he came to the edge of the sea. He flung in one pearl; the sea divided and he caught sight of the Sea dragon. The dragon exclaimed: "Who is that disturbing me here in my realm?' The young man replied: 'l found some pearls in a tortoise-shell and cast them on the sea and the water parted before me.'

'If that is so,' said the dragon, 'then come down into the sea to me and we shall live together.' Then the young man realized that this was the same dragon which he had seen in the cave. The young man to whom he had pledged brotherhood was also there. He was the dragon's son.

'You saved my son and pledged yourself to be his brother; so I shall be your father,' said the old dragon. And he treated him to wine and food.

One day his friend said to him: 'No doubt my father will wish to reward you. But accept no money, nor precious stones. Simply take that small pumpkin flask over there—with that you can conjure up whatever you wish.'

Sure enough, the old dragon asked him what he would like as a reward and the young man replied: 'Neither money nor precious stones, simply that small gourd flask.'

At first the dragon did not want to give it to him. But in the end he did, and the young man left the dragon's castle.

when he reached dry land again he felt hungry. Presently a table stood before him, laden with delicious food. The young man ate and drank. He had gone on for a while when he felt tired. At once a donkey stood before him and he climbed On its back. When he had ridden for a little while the donkey became too bumpy for him; at once a carriage appeared and he stepped inside. But the carriage too jolted too much for him and he thought:

'If only I had a sedan chair! That would be better!' And at once there was a sedan chair and the young man got inside. The bearers took him all the way to the city where the king, the queen and their daughter lived.

When the other man returned the princess to the king preparations were made for their wedding. But the king's daughter had wish to marry him and said: 'This is not yet the right man. My rescuer will come; he has half my hairpin and half my kerchief as tokens.' But When after a long time the young man failed to appear, the other pressed the king, who grew impatient and said: 'The wedding shall be tomorrow!' Sadly, the king's daughter walked through the streets of the city, searching for the man who had saved her. On that very day the sedan chair arrived. The king's daughter Saw half the kerchief in the young man's hand. Full of joy she took him to her father. He had to produce his half of the hairpin and this matched exactly the other half. Then the king believed that this was the right man. The false bridegroom was punished, the wedding was celebrated, and they lived joyously and happily ever after.

[The nine-headed bird is a well-known mythical creature, worshiped by ancient natives in Hubei Province, which during the Warring State Period was part of the kingdom of Chu.  His tenth head was bitten off by the heavenly dog, so in this story the princess bathed and nursed its bleeding wound. There is a wide circulated saying which pairs this bird with the native of Hubei province, “In the sky live nine-headed birds. On the earth live Hubei people.天上九头鸟，地上湖北佬 ” Normally those who quotes this saying express an uncomplimentary meaning, since nine-headed bird are believed to be aggressive, cunning and hard to kill.

The broken hairpin and Other broken pieces of small jewelry divided between lovers are a common motif. In ancient China, Tally (Fu) match are commonly used to signify and authenticate in military and government, Tally were made of all kinds of materials, from jade, gold, bronze to bamboo, the most famous one is the Tiger Tally used in military dispatch.

The fish is the son of a dragon; dragons, here and frequently elsewhere, are sea-gods. Gourd flasks are a common talisman in China; they are also used to confine spirits which then have to serve the owner.]