April 23, 2016
Liu Bang was born into a peasant family in Pei County. Before Liu Bang's birth, his mother was caught in a rainstorm and took shelter under a bridge. Just then, there was lightning and thunder and the sky darkened. Liu Bang's father went to fetch his wife home and saw a dragon hovering above her. Liu Bang's mother became pregnant and gave birth to Liu Bang.

Liu Bang had a high nose, whiskers and a beard, which made him resemble a dragon. He had 72 dark spots on his left leg. The young Liu Bang was outspoken, charismatic and of great forbearance and tolerance. However, Liu Bang enjoyed loafing, disliked reading and showed no interest in farming, hence his father often chided him as a "little rascal". Liu Bang persisted in his idling ways and depended on his brother's family for food and lodging.

When he grew older, he was appointed as a patrol officer and forged close relationships with the officials in the county office, earning himself a little reputation in his hometown. While having drinks with his friends in the local taverns, they would notice a silhouette of a dragon over him whenever he was drunk. The tavern owners felt that Liu Bang was an extraordinary person and provided him with drinks each time free of charge.

Once, Liu Bang was tasked with escorting some convicts to Mount Li to build the Mausoleum of Qin Shi Huang. A lot of the convicts fled along the way. He estimated that he would surely lose all of them by the time he would arrive at his destination causing him to fear for his life, because allowing the convicts to escape was a capital crime at that time. He became a fugitive and made his way to a swamp in the western part of Feng County, where he stopped for a drink of wine. That evening, he set free all of the remaining convicts, saying, "You can all go, I will go on alone from here!" A dozen or so of the braver convicts wanted to go with him. Liu Bang was getting tipsy, and decided to take the path through the swamp that same evening, ordering a man to scout out ahead.

Before long, the forward scout returned, and gave his report, saying, "There is a great serpent blocking the path up ahead, I would like to turn back." Liu Bang was drunk, and said, "You're supposed to be a warrior, what are you afraid of!" He then went on ahead, drew his sword, and cut the serpent into two pieces. After that, the road was cleared.

After traveling several li, he could not hold his liquor any longer, and lay down to go to sleep. When the people bringing up the rear got to the spot where the serpent was, they came across an old woman weeping. When they asked her why she was weeping, she said, "Someone killed my son, so I am weeping." They asked her, "Why was your son killed?" She replied, "My son is the son of the White Emperor of the West, transformed into a serpent. He was blocking the road, but has now been cut into two pieces by the son of the Red Emperor of the South, and so I weep." They thought the old woman was not telling the truth, so they were going to give her a thrashing, but she suddenly disappeared.

When the people who were bringing up the rear finally caught up to Liu Bang, who was already awake again. When they told Liu Bang what had happened, he was quite amused, and very pleased with himself. After that, all of them gradually began to fear him.

Liu Bang later became the Emperor of Han, and commonly known by his temple name Gaozu. 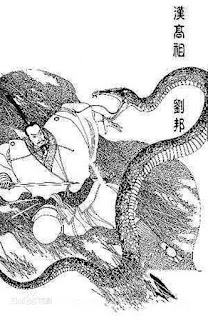 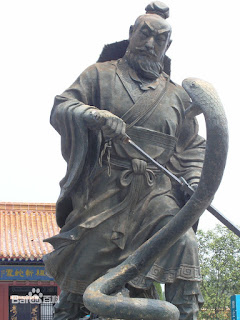 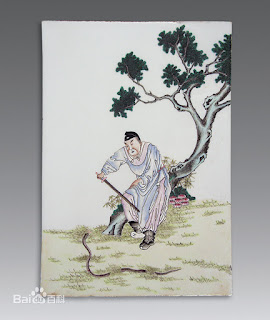