May 13, 2016
Once there was an ignorant rich man who, one day, went to another rich man's three-storied house.

Struck with admiration by the imposing, spacious, airy and well - lighted building, he said to himself,

"I'm no less rich than he. Why don't I have the same house built as this one?"

Thereupon, he sent for a carpenter and said, "Can you construct an imposing house exactly like that one?"

That carpenter replied, "It's I who built that one."

He went on, "Now you may build a house like that one for me."

The carpenter began first to level the ground, afterward laid the foundation stones and then drove in piles for walls. The stupid man could not make it out when he saw the worker doing all these. He asked, "What are you doing now?"

The stupid man went on, "I don't want the two floors below. You had better start building from the third floor for me."

The stupid man persisted saying, "But I don't need the two floors below, only the top."

Hearing those words, his contemporaries sardonically laughed at him. They all said how could one have the top floor done without building the lower floors?

Sakyamuni's four degrees of disciples who are unable to practice earnestly Buddhism and respect the Three Precious Ones, wanted to attain the path of deliverance by leading an idle life. They said, "We don't need the first three degrees below, but seek only that of Arahant's."

There was no difference between the stupid rich man and those disciples who were also laughed at by their contemporaries. 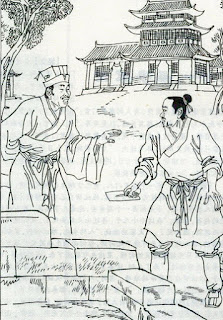