(11) THE BRAHMAN KILLS HIS SON

May 13, 2016
Once upon a time, there was a Brahman who prided himself on his erudite knowledge of astrology and various arts. He was such a conceited man that he claimed to be learned in everything. To show his ability, he went abroad carrying his son in his arms and cried. The Brahman was asked, "Why are you crying?"

He replied, "This baby is going to die within seven days. I'm grieved at his inevitable death. That's why I can't help crying."

The contemporaries said, "It's difficult to know a man's life. It's easy to make a miscalculation. He may not die seven days. Why should you weep in advance?"

The Brahman said, "The sun and the moon may set and the stars may fall, but I have never had a miscalculation on my record."

To prove his self-claimed knowledge, he killed his son on the seventh day, for the sake of fame and gain. The contemporaries heard the news of his son's death at the foretold time. They marvelled that he was indeed an erudite man who could prove true of what he had said. They all came to pay him homage, and were heartily convinced that he deserved respect (as a prophet).

This is also true with those of Sakyamuni's four degrees of disciples who claim to have attained the path of Enlightenment for the sake of the material offerings from others. They would try to fool people by killing an innocent man in order to deceitfully show the virtue of compassion. Such disciples would be certainly doomed to limitless suffering in time to come, just like the Brahman who wanted to prove the accuracy of his prophecy by killing his son and thus deceived people. 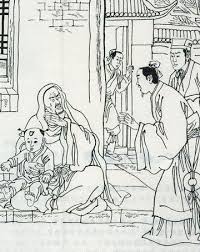