(14) OFFERING THE GUIDE UP AS SACRIFICE TO GOD

May 13, 2016
Once upon a time there was a group of merchants who wanted to go to the sea. A guide was required. They set out in quest of such a man. After finding such a man, they started the trip and saw a temple when they reached a land of wilderness. A man had to be immolated to cross it.

After consultation, the group of merchants said that they could not choose anyone in the company to be killed, for they were all related. The only one fit to be sacrificed was the guide. So they killed him. After performing the rites, they soon lost their way and knew not which direction to go. They then died one after another.

So are the people in general.

Those who seek to fish for treasure in the sea of Dharma should keep the commandments of doing good deeds as their guide. If they break them, they will end their lives in the wilderness and can never be rescued. Furthermore, they will have to go through the Three Evil Paths of Transmigration and suffer forever and ever.

Such men are just like the group of merchants who killed the guide and died in a body as a result. 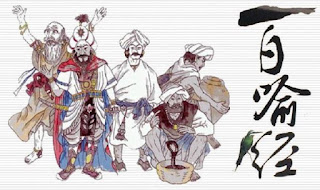