May 13, 2016
Once a merchant lent half a cent to a man who then took a long time repaying him. The merchant went to the man to ask him to clear the debt sooner. To go there, he had to pay two cents as ferry fare to cross a wide river. The debtor was not at home when he arrived there. On his trip back, he had to pay as much again. It amounted to four cents in total.

For a debt of half a cent, the merchant lost four cents. Moreover, he got very tired from his journey. He lost a great more than what he stood to gain. As a result, he was sardonically laughed at.
So are the people at large.

To seek a little fame and gain, people will spare no pains to bring ruin upon what should be their greater concern. They seek self-preservation at the expense of morality. Consequently, they will earn a bad name in this life and suffer retribution in the hereafter. 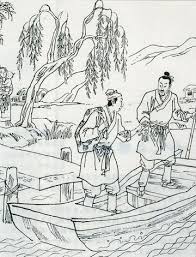