May 14, 2016
Once upon a time there was a poor man who had to work very hard in the king's service. As time went on, he became emaciated. Out of pity, the king gave him a dead camel. Having received it, the poor man began to flay it. His knife being very blunt, he looked for a whetstone to grind it. At last, he found one upstairs where he sharpened the knife.

He then went back downstairs to skin the camel. He ran up and down the stairs doing the sharpening and skinning frantically for a while and finally he felt so tired that he could not go on any longer. Then he had to hang the camel upstairs to be closer to the whetstone. People guffawed at him.

A stupid man who, by breaking the strict commandments gathers plenty of money and uses it on offering in the hope that he will be born in Heaven. This stupid man is just like the poor man who worked hard for little gain in hanging his camel upstairs and sharpening his knife. 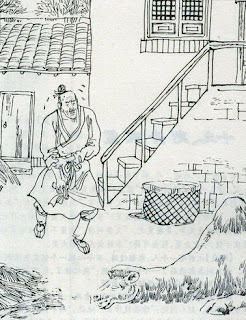