May 15, 2016
Once upon a time, there was a man who was punished by the king by whipping and was wounded from it. He applied on the wounds horse excrement for quick recovery. A stupid man nearby was pleased to see it. He said to himself, "I have just discovered the method to cure a wound faster."
As soon as he got home, he told his son, "You are going to whip me until I'm wounded. I have got a good method to cure wounds. I should like to try it."

Then, he was flogged by his son who dressed his wounds with horse excrement, believing it was a good method.

So are the people at large who hear that the practice of meditation on impurities could remove the evil corruption of the body. They say to themselves in these words, "We are going to meditate on venery and the five desires."

They did not see the impurities of the body, but rather got deceitful and wrong ideas from the pursuit of sexual pleasure. Furthermore, they suffer from Transmigration and descend into Hell.
This is held to be true with the stupid at large dressing their wounds with horse excrement. 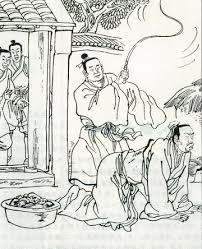