May 15, 2016
Once upon a time, there was a man whose wife was graceful except for her ugly nose. When he was out, he saw another graceful looking woman with a pretty nose. It came into his mind that "I would cut her nose and transplant it on my wife's face. Wouldn't that be nice?"

He then cut the nose off this other woman. Carrying it home he hurriedly called out to his wife, "Come quickly! I got a pretty nose for you."

Once she came out, he cut off her nose and replaced it with the one he had cut off first. It did not fit; also the wife suffered a great pain.

So are the stupid in the world. They hear that aged monks and Brahmans with great fame and merit are respected and much supported. They say to themselves in these words, "There is no difference between them and us."

They falsely pretend to be virtuous. Not only do they gain nothing, they get a bad name for their misbehaviour as well. Those people are just like the stupid man cutting other's nose only to injure his own wife. 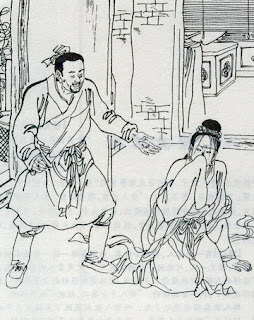