May 16, 2016
Once upon a time, there was a shepherd who was skilful in raising as many as thousands of sheep. However, he was so stingy that he would not spend a penny.

At the time, a swindler found means to make friends with him and said, "Since you and I have become intimate friends united as one man, there should be no gap of any kind between us now. I know a pretty girl from a certain family. I should like you to ask her to be your wife."

The sheep-farmer was glad to hear those words. He gave him a flock of sheep and other precious things.

The swindler then said, "Now your wife has brought a child into the world."

The sheep-farmer was very delighted to learn about this, in spite of the fact that he had not met her yet. Again he gave him more things.

Then one day the swindler said, "Your child is dead shortly after birth."

On hearing those words, the sheep-farmer cried bitterly and sighed ceaselessly.
So are the people at large.

There are people who, acquiring much knowledge, put their creed into practice only for fame and gain. They keep secret its teachings, unwilling to preach or to teach the others. Indulging in mundane pleasures, they are cheated by the transience of their bodies like the poor man cheated by the illusion of getting a wife and a child. Consequently, they lose first their good faith, then their lives and finally their precious possessions. They can then only shed bitter tears by getting depressed and melancholy just like the sheep-farmer. 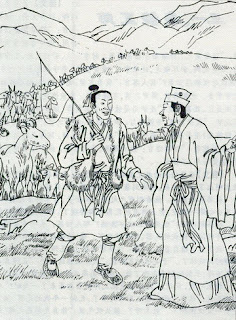