(33) HACKING A TREE DOWN FOR FRUIT

May 16, 2016
Once upon a time, there was a king who had a tremendously gigantic and beautiful tree. It always produced excellent fruit with fragrance and sweetness. One day the king told a guest who was visiting his palace, "Wouldn't you like to pluck some of the fruits?"

The man replied, "I wish to have some, but how can I get them, the tree is so tall and large."

The king then ordered to have the tree hacked down to get the fruit. In this context, all hard efforts were made in vain. The king still tried to revive the tree, which had withered and died.

So are the people at large.

Buddha, the king of the Law, possesses a "tree of keeping commandments" which bears wonderful fruit. It gives people happiness and makes their wishes come true. To get the fruit, one has to observe all commandments.

Those who do not know how to do good deeds by expedient means, do wrong things in breaking commandments instead. This is just like the king who ordered to have the tree hacked down and the unable to make it grow again. Those who break commandments are just like that. 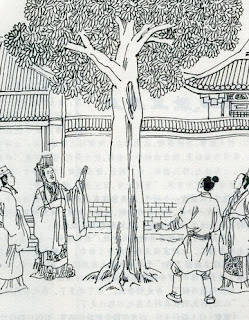