(35) THE MIRROR IN A VALUABLE CASE

May 16, 2016
Once upon a time there was a poor and weary man who was always in debt. Insolvent, he hid himself in the wilderness where he found a valuable case full of precious things. A crystal mirror covered them. The poor man was most delighted to see them. He did not hesitate to take them. But he was frightened when he discovered a man's image in the mirror. Twisting his hands, he said, "I thought it was nothing more than an empty case. I wasn't aware of your being in the case. Don't get angry with me!"

He then gave up the whole case. So are the people from all walks of life.

Those who are weary of countless annoyances in life and persecuted by the creditors of the Transmigration Devil, want to avoid them and free from them through their belief in Buddhism. They begin to practice their faith and do good deeds just as the valuable case to the poor man. Troubled by the man's image- in the mirror, they wrongly cling to the ego taken as the real. They fall decadent and lose all their merits acquired previously from meditation, monastic grade and good deeds.

Furthermore, they fail in their attainment of the Nirvana from the Three Vehicles, just like the stupid man sticking to the prejudice of the ego and abandoning their precious findings in the case. 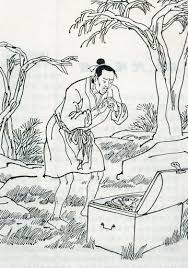