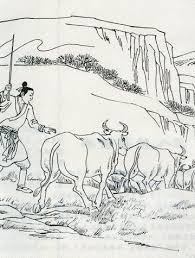 Once upon a time, there was a man who owned two hundred fifty cows. He often took them to the pastureland for grazing. By accident, one day a cow was killed by a tiger. The cattle owner said to himself, "Now that a cow is lost, it's no longer an even number. What's the use of having them at all?"
He then drove the cattle to a high cliff and killed them all by pushing them down the cliff.
So are the vulgar people in the world.

One who observes all of Buddha's commandments breaks one commandment without any sense of shame or repentance. On the contrary, he says to himself: "Now that one commandment is broken, I'm no longer perfect. What's the use of keeping any of the others?"

All commandments are broken as a result of his ill logic. He is just like the stupid man killing all his cattle.