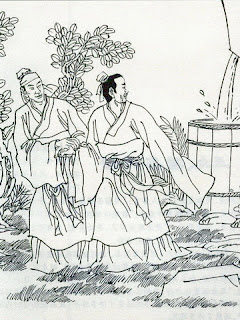 Once upon a time, there was a man who was tired and thirsty from traveling. He drank some fresh running water from the wooden bucket. After he had had enough, he raised his hands in front of the water and said, "I have had enough to drink. Stop flowing!"
The water went on. Losing his temper, he yelled, "I told you to stop. Why don't you listen?"
On seeing this, an onlooker said, "You are so ignorant. Why don't you just leave?"
Thereupon, the onlooker drew him away.
So are the people at large.
One who immerges himself in transmigrations and the thirst of desire drinks salty water of the five desires. After getting tired of them, he says in those words, "Disappear, thou Five Desires. Don't let me see you again, I've told you. Why are you still present?"
A wise man tells him, "You can keep the Five Desires away by controlling your six organs of senses2 or by closing your mind and thought to them. Then illusions will not arise and consequently Enlightenment may be attained. Why do you need to tell "Desires" to be out of your sight and to disappear?"
This is just like the story of the man yelling at the water.