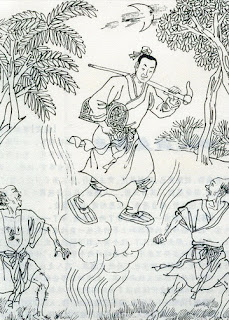 Once upon a time, there were two Pisacah devils who conjointly owned a suitcase, a stick and a pair of wooden shoes about which they fought for their monopoly. They were quarrelling all day long without reaching a settlement.
An onlooker came over and asked, "What are the particularities of those three things that you have been fighting for so angrily?"
The two devils replied, "This suitcase of ours turns out all sorts of things such as clothes, food, bed articles used on a bed, and other living necessities. One who takes the stick can conquer his hateful enemies without encountering resistance. One who puts on these shoes will be able to fly without a hitch."
Upon hearing it, the onlooker said to the devils, "Would you please stand further away! Let me equally apportion them to you both."
The two devils moved away. Immediately the onlooker flew off snatching their suitcase and stick with the shoes on. The two devils were startled at the loss of their share. To them he said, "I got what you have been fighting for. Now you need not are any more."
Here Pisacah refers to devils and heretics.
Almsgiving applies to the suitcase that turns out all the essential things to the needs of the Five Ways of Existence such as human beings, Devas, etc.
Meditation symbolizes the stick, which can disperse or submit devils, enemies and afflictions as thieves.
Commandments observing is like the shoes that ensure rebirth in the world of Devas and men.
As for the devils and heretics, coveting the suitcase, it signifies that they labour themselves to the seeking for the reward of Enlightenment in the imperfect way, which result in nothing to be obtained.
If one can perform acts of merit together with almsgiving, commandments observing and meditation practice, he will be rid of all suffering and in turn obtain Nirvana.