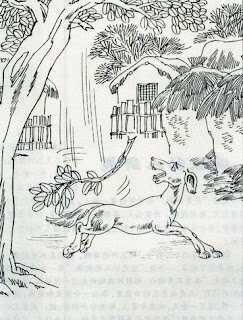 Once a fox who stood under a tree was hit by a twig fallen on his back. He then closed his eyes for he did not like to see the tree. Soon after, he went to an open space. He would not return even when night fell.
Later, however, when he saw the branches and the leaves of a big tree wavering up and down in the wind, he said to himself, "The tree must be calling me." He then went back under the tree where he had got hit earlier.
So is a stupid disciple.
In his attempt of becoming a monk, he has chances to approach a tutor from who he runs away at his first slight rebuke. Afterwards, he gets into a lot of trouble when he meets friends who have adverse influence over him. Only then does he begin to think of returning to his tutor. It is indeed stupid of him to go and come like that.