(49) BOYS' ARGUMENT ON THE SUBJECT OF HAIR 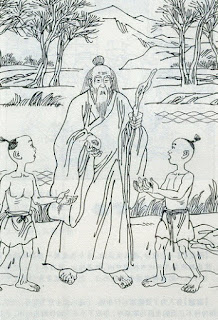 There were once two boys who dived in a river where they found at its bottom a bundle of feathers. One said that it was the beard of some spirit, whereas the other said it was the bear's hair. They argued without a right answer. A supernatural being nearby was then approached by the two and was asked to settle the argument. He put rice and sesame seeds into his mouth and chewed for a while, then he spat them into his hand and said, "What I have got here seems to me a peacock's excrement."
It is known his answer was beyond the question, which was put to him. So are the stupid in the world.
During the time of preaching, those who facetiously discuss the teachings of Buddhism do not give the answer to the right doctrine, just like the supernatural being not answering the question. People from all walks of life are made a laughing stock. So is the frivolous and empty gossip.