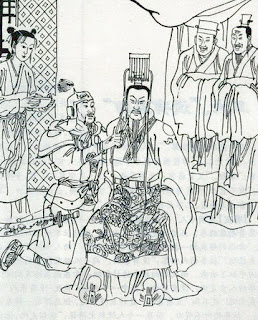 Once upon a time, a king's personal attendant risked his life to save the king at the battlefield. The king was so grateful that he gave his lifesaver whatever he wanted. The king asked, "What do you want? Your wishes shall be granted."
The man replied, "Allow me to shave you when you need a shave."
The king said, "If that is what you wish to do, I'll grant it to you."
Such a stupid man is laughed at by the people at large. It would be so much better for the barber to ask for half a country or to become prime minister or minister of State rather than to practice the mean profession. Only a stupid man would do so.
To attain Buddhahood, all Buddhas cultivate themselves with hardship during a long and painful period of time. What people do not realize is that Buddha Shakyamuni’s bequeathed teachings are scarce to be heard and our human bodies are hard to be acquired as well. It is like a blind turtle's trouble in finding a log hole floating at the surface of the water.
Fortunately enough, once these two difficulties are overcome, people are self-complacent with their shallow mind and few commandments are observed without any ambition of ever attaining Nirvana, the perfect Enlightenment. They find themselves contented with no further improvement and instead end up doing evil deeds.