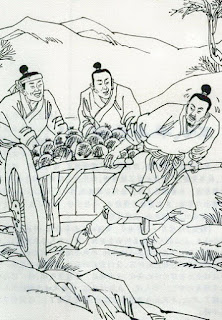 Once upon a time, two men walking together saw another fellow trying in vain to pull a chariot loaded with sesame out of a hole on the road.
To the two men, the fellow said, "Please give me a hand."
The two men replied, "What are our, rewards?"
The fellow said, "Nothing."
In spite of the answer, the two men helped to get the chariot out of the hole. They demanded, "Now give us something."
The fellow replied, "I'll give you nothing!"
Again the men said, "Give us "Nothing" then!"
Half smiling, one of them said, "He doesn't want to give us anything. No use getting upset."
The other one replied, "He said he'd give us 'nothing'. We'll settle for that 'nothing'."
When one of them says 'nothing', that 'nothing' is composed of two words, which constitute an unreal name. If the vulgar and common people cling to 'nothing', they will be born in Space World of Formlessness. Whereas the other says 'nothing' to signify no form, no vows and no Karma.