(58) THE TWO BROTHERS AND THEIR INHERITANCE 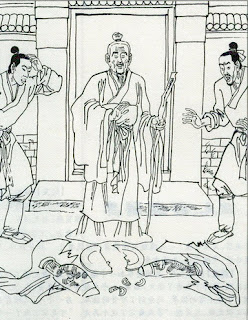 Once upon a time, there was a Ksatriya of the Makara Kingdom who fell seriously ill, and was aware of the fatal hour. To his two sons he ordered, "After my death, divide between the two of you evenly my effects and money."
After his death, the two sons followed their father's will. But the elder brother complained against the younger of unfairness in their shares. An old man nearby said, "Let me teach you how to divide equally your father's fortune."
"How!" they asked.
The old man replied, "Cut all the valuable garments into two parts. Then break everything else into two equal parts, such as tray, bottle, bowl, dish, money and so forth."
People laughed at his suggestion. Such folly is just like those heretics who use one-sided method of separate answer to all questions.
There are four ways to answer questions as follows:
1. Affirmative answer.
For instance: All human beings are mortal
2. Separate answer
For instance: The dead will be reborn.
This should be answered separately. Those who have no desires at all will not be reborn. Those who have desires will be reborn.
3. Reversal question and answer.
For example, someone asks: Are all human beings supreme ones?" This can be questioned reversely as follows: "Are you referring to the Three Paths of Transmigration or to the host of Devas?
If you are referring to the former, I should say human beings are supreme. If the latter, I should say human beings are not equals to Devas.
4. No answers to questions
If you ask the fourteen difficult questions, such as whether the world has limit or whether human beings have any beginnings or ends.
Pretending to be wise, the ignorant heretics divide the four ways of answering questions by only using the separate answer, just like the stupid man giving advice to the two sons to divide all effects and money into two parts.