(61) BRAHMA'S DISCIPLE CAN CREATE ALL THINGS 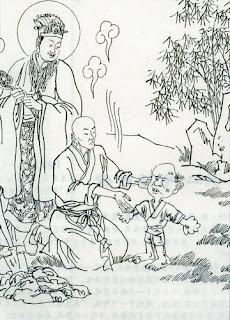 Brahmans say that the Great Brahma was both father of the world and creator of all things. One of the Great Brahma's disciples once said he also had the power to create things. He was too stupid to be wise.
To the great Brahma, he said, "I can create everything."
The Great Brahma replied, "Don't talk like that. You can't. Since you don't listen to me, I wonder how you do it."
After seeing what his disciple had created, the Great Brahma said, "The man's head that you have made is too big and the neck too thin. The hands are too long and the arms too bony. The feet are too small and the legs too fat. It looks like a Pisacah devil."
Through the Great Brahma's words, we should realize that human beings are created by their own deeds resulting from Karma and not by the power of the Great Brahma.
Buddha's preaching is not ambiguous. As they preach the Eightfold Noble Path, they cling neither to the view of total annihilation nor that of permanence. On the contrary, the heretics do cling to the view of annihilation and permanence. They cheat the world by performing ceremonies and creating images. What they preach really is not Buddhism.