(62) THE PATIENT EATS THE PHEASANT MEAT 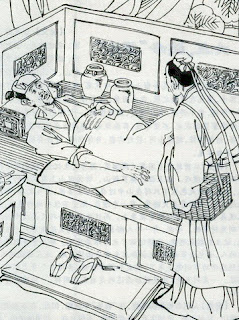 Once upon a time, there was a man who was seriously ill. A skilful physician prescribed that he could be cured by eating some pheasant meat. After he finished eating one, the patient did not eat it again. Afterwards, the doctor came to him and asked, "How do you feel now?"
The patient replied, "You have told me to eat some pheasants. Now that I have eaten it, I dare not eat it again."
The physician said, "But why not? How can you expect to be cured with only one pheasant?"
This is also true with all the heretics. They should understand what the mind means on hearing such wise and skilful doctors as Buddha's and Bodhisattva's preaching. However, they cling to the view of permanence thinking that there is only one mind from the past, present through future, which does not undergo any change. This is just like the patient eating only one pheasant that his illness of ignorance and worries cannot be cured.
All Omniscient Buddhas teach the heretics to abandon their prejudiced view of permanence. For all phenomena are subject to change at the time of thought. How can the mind remain unchanged! This is just like the physician's telling the patient to eat more pheasants.
So is Sakyamuni Buddha's preaching to all men to understand all his teachings. Sakyamuni has it that things which can be ruined or destroyed are called impenitence.
Things which can be lasted are called continuity.
Once the context is understood, people will eradicate the wrong view of permanence.