(7) ONE RECKONS ANOTHER MAN TO BE ONE'S ELDER BROTHER

May 13, 2016
Once upon a time, there was a man endowed with a respectable appearance and intelligence as well as wealth. All these evoked feelings of admiration and praise from the people around him. Another man then claimed this man to be his elder brother. He did so, because of the man's wealth. When he needed money, he called the man elder brother. After the rich man paying his debt, he stopped calling him elder brother. A bystander asked, "You are a strange man. When you are in need of money, you call him elder brother. When he is in debt, you will not. Why?"

The heretics, who have heard the good words of Buddhism, purloin and make use of them as their own. When people try to teach them how to practice the goods words, they do not want to listen. They declared that they use the good words of Buddhism to instruct the other people in order to earn a living. There is no need that they should bother to know how to practice it.

Those heretics are just like the stupid man who calls the rich man elder brother for his money. 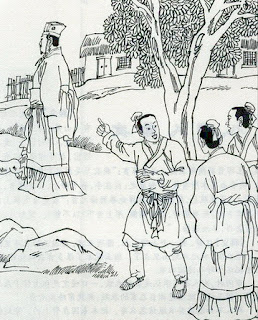