May 12, 2016
Once upon a time, there was a man who had a jar used to hold grain. A camel put its head into it to eat the grain, but it could not get its head out. The man became angry and worried. An old man came up to him and said, "Don't be upset. I'll tell you how to get him out. It'll get its head out in no time if you listen to me. You should cut off its head and he'll be out."

The man followed his words. He killed the camel and also broke the jar. Such an idiot was jeered by the people at large.

This is also held to be true with the common stupid men. Those who hope for Enlightened minds through the Three Vehicles, must keep commandments and avoid doing evil deeds. However, they indulge themselves in the Five Desires, which will destroy them. Not only do they end up breaking commandments, but also giving up the Three Vehicles. In addition, they follow their own inclination and yield to their whims at the same time. There is nothing evil they will not do. Thus they abandon both the Three Vehicles and the pure commandments like that stupid man losing both the camel and the jar. 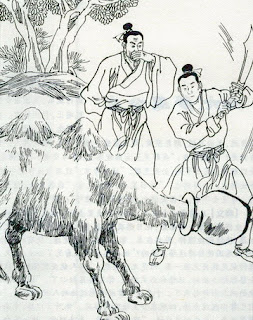