THE HEAD IS BROKEN WITH PEARS

May 12, 2016
Once upon a time there was a bald-headed man who was hit in his head by a few pears thrown at him. He forbore taking the blows without knowing that he should have tried to dodge them. A bystander asked the man, "Why didn't you dodge the blows that wounded your head?"

The man answered, "Proudly relying upon doing violence to others and being short of intelligence, he, the attacker, took my bald-head for a stone. That's why he struck me with pears and broke my head like that."

The bystander retorted, "It's you who are indeed short of intelligence. How can you call him stupid? Haven't you been stupid enough to get injured without the sense to run away?"

So is the monk who, unable to abide discipline, meditation and wisdom, keeps only a good appearance to expect support. He is just like that stupid man who got as far as wounded on the head without knowing to run away and called the attacker stupid into the bargain. 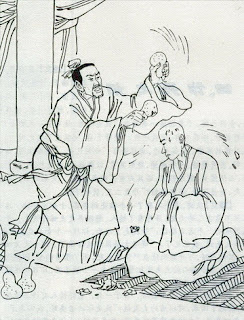