(63) AN ACTOR WEARING A DEMON'S GARMENT

July 13, 2016
Once upon a time, there was a troupe of actors from Cadhara Kingdom, rambling in different parts of the country giving performances due to a famine. They passed the Pala New Mountain where evil demons and men-eater Raksas had been found. The troupe had to lodge in the mountain where it was windy and cold. They slept with the fire on. One of them who were chilly wore Raksa demon's costume and sat near the fire when another actor awoke and saw him. He ran away without looking closely at him. In general panic, the whole troupe got up and ran away. The one who wore the Raksa garment, not realizing what was happening, followed them.

Seeing he was behind them, all the actors got more frightened to do them harm. They crossed rivers and mountains, and jumped into ditches and gullies. All got wounded in addition to the great fear they suffered. They did not realize that he was not a demon until daybreak.

So are all the common people. Those who happen to be in the midst of the misfortune of famine, do not spare themselves trouble to go far away to seek for the sublime teaching of the Four Transcendental Realities of Nirvana, namely eternity, bliss, personality and purity. However, they cling to their egos which are nothing more than five components of a human being. Because of this, they are flowing back again and again through transmigration. Pursued by temptation, they are out of sorts in falling into the ditch of the Three Evil Paths. Only when the night of transmigration is ended, does the wisdom appear once again. Also only at this moment can one perceive the five components of a human being have no real ego. 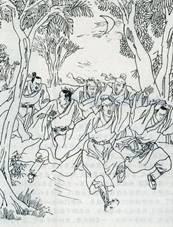