July 13, 2016
Once upon a time, there was a woman who led a promiscuous life. She hated her husband when she was burning with lascivious desires. However, there was no opportunity for her to carry out any of her schemes to kill him. It so happened that her husband was sent on an official mission to a neighbouring state, the woman secretly prepared some poisonous pills. To the husband she said with a faked tenderness, "Now that you have been sent far away on this official mission, I have prepared for you five hundred pills both as food supplies and as something to cheer you up. You will take them when you are hungry, when you reach the border."

The husband did not take them when he crossed the frontier. It was dark then and he decided to rest in the forest. Afraid of wild animals, he climbed up a tree to spend the night. He left his pills under the tree.

On that same night, a group of five hundred thieves stopped at the same spot with five hundred horses and precious things stolen from their king. They were all hungry and thirsty from their narrow escape. Finding those pills under the tree, the thieves took them and, on account of the strong poisonous effect, died one after another in no time.

At daybreak, the man hiding in the tree saw the dead thieves. Then he deceitfully made as if he slew and shot the corpses with swords and arrows. Afterward, he got all the horses as well as the stolen goods together and rode towards the foreign country.

Meanwhile, the king was on his way with his guards trying to apprehend the thieves. They came across the man and asked, "Who are you? Where did you get these horses?"

The man replied, "I have come on a special mission. On the way, I encountered this band of thieves. I fought them and killed them all. Their corpses are under a tree over there. That's how I got these horses and precious things. If your Majesty doesn't believe it, you can inspect the casualties on the spot where we fought."

Immediately, the king sent his guards to inspect the spot. They found out what he had said was true. The king was overwhelmed with admiration for his unusual bravery. Later, when the man was sent back to his own country, the king bestowed him both a knighthood and treasures as well as a piece of land.

The king's old officials said with jealousy, "Why does your Majesty bestow him such rewards to a but stranger? Besides, the grant of his title of honours goes above the old officials."

Hearing those words the stranger said, "Who is intrepid enough to challenge me? Let's have a duel."
The old officials were startled and none would venture to accept the challenge. At the time, there was a ferocious lion in the wilderness of the country, which often disturbed the royal passages. The lion killed many travellers. The old officials conferred on the matter.

"The way this stranger brags so much about his fighting spirit, it will be wonderful if he is made to kill the lion for the sake of the country."

They then asked the king to give him a sword and spear, and sent him off to kill the lion. The lion attacked him with a roar as soon as it saw him. In great fear, the man climbed up the tree. The lion lifted its head towards him and roared. The man got so frightened that he dropped his sword right into the lion's mouth. The king of the forest died instantaneously.

The stranger, delirious with happiness over his new conquest, came to report the news to the king who, in turn, multiplied his rewards. Furthermore, he got respect and praises from the whole court as well as the country. 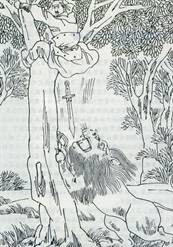