July 13, 2016
Once upon a time, there was a man who went from North India to the South where he lived for a long time, got married and settled down. One day the wife prepared some food. The husband ate it in one mouthful while it was piping hot. She asked in shock, "There is no one here trying to take the food away from you. What made you eat so fast?"

The husband said, "That's a great secret that I have been keeping from you."

Upon hearing these words, the wife insisted on knowing the secret, thinking there might have some special reason for it. After a pause, the husband replied, "My ancestors made it a rule to eat quickly, I'm doing it nothing more than an act of observing the tradition. This is the reason of my eating in a hurry.

The same also holds true with the common people. People who are doing evil things have no sense of shame, because they do not know what is right or how to distinguish truth from falsehood. They say they observe the tradition. They accept and follow it to death, just like that stupid man making it a rule to eat quickly. 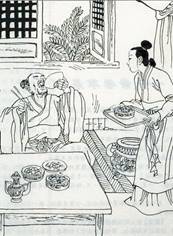