July 13, 2016
Once upon a time, there was a man who had two wives. Whenever he was with one of them, the other got very angry. Faced with such a dilemma, he decided one night to lie flat on the back between the two. It happened that it was raining so heavily that their house began to have a leak. Water and mud fell into his eyes, but he dared not get up and run away, due to the decision he had taken before. Finally he became completely blind.

This is also held to be true with the common people of the world.

By keeping bad company and doing unlawful deeds, people create Karmas and fall into the Three Evil Paths of Transmigration. Not only will they remain in the round of existences forever, but also lose their eyes of wisdom, just like the stupid man who turned blind. 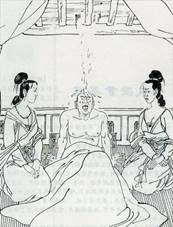