(72) AN OPERATION ON THE MOUTH

July 13, 2016
Once upon a time, there was a man who went to his wife's home where he saw people removing the husk from rice. He stole some rice and hid it in his mouth. When the wife came to talk to him, he could not answer her with his mouth full. He disliked to leave it lest he would put her to shame. So he stood speechless. That aroused her curiosity all the more.

Looking at him and feeling him with her hands, she found his mouth swollen. Thereupon she said to her father, "On his way over, my husband suddenly got a swollen mouth and is unable to speak."
Immediately her father sent for a doctor who said, "Very serious is your illness. It will be cured by an operation."

Then an operation on his mouth was done and his act of theft was exposed.
This is also held to be true with the people at large.

In doing evil deeds to break the pure commandments and hiding sins, people descend to the Three Evil Ways of hells, beasts and hungry ghosts. This is just like the stupid man, being reluctant to let out rice, on account of a trifling shame matter, and undergoing an operation on his mouth to reveal his sins. 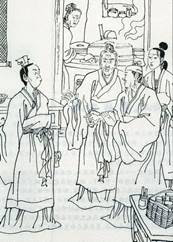