July 13, 2016
Once upon a time, there was a kingdom which had a law that all Brahmans in the country should keep their bodies clean and those who do not would be subject to all kinds of hard works.

There was a Brahman who was always holding an empty pot pretending that he was a clean man. When someone poured water into his pot, he spilled it and said in these words, "I don't want to wash myself. Let the king do it himself. I have been lying to shun hard labor, because of the king's law."
This is also held to be true with the common monks.

A monk, who has shaved his head and worn dyed garments, could break commandments while pretending to be following them outwardly. Thus he wants to receive gain and offerings and avoids labor work, superficially he looks like a monk, but in reality, he cheats, just like the Brahman holding an empty pot and keeping up appearances. 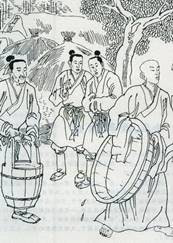