July 13, 2016
Once upon a time, there was a group of frontiersmen who had never seen a monkey before. Thus they could not identify it. They were told that its milk was delicious. It happened that they found a male donkey and they tried to milk it. They began their wrangling about apprehending it.

One seized its head: another, its ears; the third, its tail; the fourth, its feet; and finally the fifth, its penis. All wanted to be the first to drink its milk. The one who grasped the donkey's penis called out that he could get milk there from. Then he began to extract. Finally, this group of people felt tired and bored, for they could not get what they had wanted. They got nothing in return, despite of their effort. They were all laughed at by the people at large.

This is also held to be true with the common heretics.

The heretics who learn their religious faith from some inadequate sources, might lead to illusions giving rise to all kinds of heterodox views such as to go naked, to fast, to jump into precipice or go through fire. With all these kinds of heterodox views, they fall to the evil paths, like those stupid men seeking in vain for milk from a male donkey. 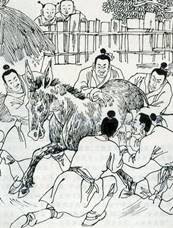