July 13, 2016
Once upon a time, there was a man who had a pain in his rear. The doctor said it would be healed by giving an enema. He immediately went to fetch the instruments for that purpose. The patient took the drug before the physician came back. His belly became inflated beyond description. After his return, the doctor wondered what had happened to the patient and asked him the cause of it. To the physician, he replied, "I've just taken the drug for enema. That's why I'm dying."

After hearing these words, the doctor scolded him in following words, "You are the most stupid man I've ever met. You are acting against all senses."

Then he gave him other drugs. The patient vomited and was cured. Such a stupid man was laughed at by the people at large.

The contemplation in meditation comprises many methods. Those who practice meditating on the uncleanness of the human bodies are not appropriate to practice on the counting of the breathings, whereas those who practice the counting of the breathings should not practice the meditating on the six parts of a human body. To turn it upside down without following a fundamental principle will cause life itself. Those who bluntly practice the contemplation in meditation without consulting a good master are just like that stupid man taking the wrong thing for his illness. 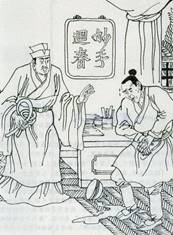