July 13, 2016
Once upon a time, there were a man and his son traveling together. The son got into the woods and was bitten by a bear. Scratches were all over his body. Being in a difficult situation, he fled to his father. Seeing his son's wounds, the father was astonished and asked, "How did you get wounded?"
The son replied, "There was a long-haired monster that bit me."

The father grasped bows and arrows and went to the woods where he saw a longhaired supernatural being. When he was about to shoot at him, a bystander said, "Why do you want to shoot at this, since he is innocent? You should punish the guilty."

This is also held to be true with the stupid of the world.

People offended by an immoral monk in his religious robe, are apt to do the worst harm to all good and virtuous monks. This is just like the father wanting to be revenged on the supernatural man for his son's bites by a bear. 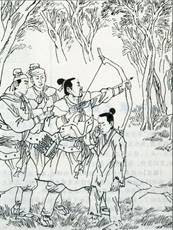