(82) THE CULTIVATION OF THE LAND

July 13, 2016
Once upon a time, there was a peasant who went to another farmer's property to examine his wheat plants. He asked the owner, "How do you make the wheat grow so well?"

The owner replied, "First, you have to flatten the field. Then you pour some liquid manure. That's why it has turned out so nicely."

The peasant then did what the other farmer had told him. He poured liquid manure to blend with the soil and scattered seed in land. Treading the field with his feet, he was afraid that the land would become too hard to be fruitful.

He said to himself, "I should sow sitting on a bed carried by others. That'll do."

He then ordered each of the four men to hold a leg of the bed to scatter seed in land which became all the harder. Initially he was afraid that his own two feet might be too heavy for the land. Then he added still eight of others to do the job. He was laughed at by others.

To cultivate the field of commandments and wait the good yield of shoots, people, should consult a master to practice the Buddhist teachings, however, they break the commandments and do evil deeds. Thus the shoots of commandments do not grow, just like the peasant who was afraid of his own two feet and added still eight of others. 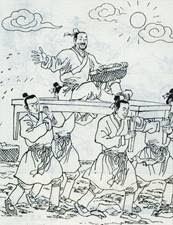