July 13, 2016
Once upon a time, a female monkey was beaten by a full-grown person. The animal had no other alternative than gave vent to its anger later on a small boy.

This is also held to be true with the common stupid men.

One who is offended by another person takes out his anger sometimes on a third person. Human affairs are always in a state of transition without discontinuity. For things born in the past are bygone. What come after are different things. Thus the one wrongfully gets into a temper only gets deeper and deeper into hatred.

This is just like the monkey that has been beaten by a grown person vents its anger on a small boy. 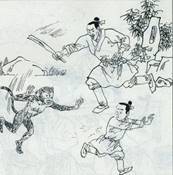