(84) DOGS WERE BEATEN WHEN THE LUNAR ECLIPSE HAPPENED

July 13, 2016
(84) DOGS WERE BEATEN WHEN THE LUNAR ECLIPSE HAPPENED
Once upon a time, there was a king of Asuras who covered the moon with his hands when he thought it too bright. However, the stupid men laid the blame on innocent dogs, which were sometimes unjustly beaten.
This is also held to be true with the people at large. They often suffer from the desires, anger and ignorance. But they want to destroy them by sleeping on thorns and their bodies are burning with the five pains just like the dogs were beaten when the lunar eclipse happened. 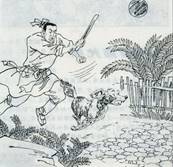